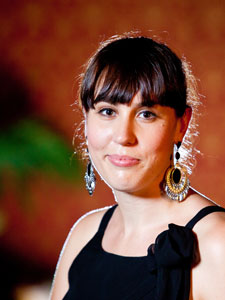 JO FABRO is a powerful and dynamic singer who recieved training as a jazz vocalist through the Bachelor of Music degree at the University of NSW. Jo has studied with many prominant musicians and vocalists such as: Joy Yates, Pat Powell, Dave MacRae, and John Harkins, as well as attending workshops by artists such as Kurt Elling, Darren Percival, Barbara Morrison, Leigh McCrae, Nikki Crayson, and Tina Harrod. In 2005 she was accepted as a top 10 Finalist in the prestigious Wangaratta Jazz Festival Vocalist of the Year Competition. Jo is a regular feature in the Sydney and Australian jazz and soul scene, and has also performed in Tokyo Japan, at the Tauranga Jazz Festival in New Zealand, as well as at many of Australia’s top live music venues such as: The Vanguard, Marble Bar, The Basement, Peats Ridge Music Festival, MTV Australia Music Awards, The Macquarie Hotel, Wangaratta Jazz Festival, Manly Jazz Festival, Darling Harbour Jazz Festival. She has also performed alongside artists such as Jade MacRae, Everemore, Axel Rose, Paulini and many more.