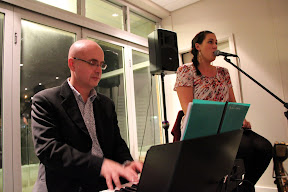 On 5 March as part of the epic weekend of gigs Jason mentioned in the previous post, we had the pleasure of performing at Bronte Surf Life Saving Club for the wedding of Ross & Claire (and their funky friends who really loved to dance!)

They had a really warm relaxed vibe to the night, with a great marriage service conducted by the minister from the Wayside Chapel, and a speech from the very familiar voice of Peter Harvey – who also happened to be Claire’s father.

This venue is a bit of a tricky load, but the staff were great & there is a good performance space for the band once you get inside + some very tasty treats supplied by the Avocado catering group.

Here’s a live track we recorded that night at Bronte Surf Club: